Very good to have Ashley and Windstar, and Carly and Chance with us.  Windstar was a little anxious at first but Ashley settled her nicely.  I think the final count of riders was 22 or 23, but I’m not sure.
Many thanks to Mr. Dave who was a gracious host and guide.  Very much appreciate his generosity in opening his home for the day.

It was wonderful to get to spend a little time with Bee even though I would have preferred she be RIDING with us rather than lunching with us.  Although it was very good pizza and the cookies were absolutely excellent; thank you very much Bee.  We lunched at the cabin atop a beautiful knoll with a 360 panoramic view.  All the horses tied around the porch and cabin behaved very well as far as I could tell.  If there was an incident, I missed it.  Wait . . . Chance did have an issue, origin unknown to me.  When I saw him he was pulling back (calmly I must add) on his rope which appeared to be tied to his tie-down???  This put an enormous amount of pressure on the front of the tie-down across his nose, which had slipped down to the top of his nostrils.  It looked ugly and made a horrible sound as he breathed, but he let Ashely fix him right up with no big spill.  If not for the horrid roar of his breathing, not sure anyone would have even noticed him!  Horses with functioning brains are so delightful to be around.  Think he may be a good guy.

TLH was a little gimpy with no explanation so Debra and I headed back after lunch rather than continuing with the rest.  Hated to miss out, but not knowing what was the cause, was not worth the risk.  Fortunately, Debra says TLH was fine on Sunday.

For the actual ride – we were to meet at the barn at 900a and ride at 1000a.  Met Debra in Abingdon at 730ish, got to Lebanon at 820!  So we had a leisurely breakfast at the downtown McDonalds, then went on to the barn.  Needless to say we were the first to arrive.  It was actually very nice to have plenty of time to get ready!  For the record, no one was waiting for me when I got on.  I was on for quite a spell before the last folks were mounted and riding out, at 1045.  We started out in the back but that didn’t last long; I know, really not the norm for us.  I was surprised at how many horses were actually slower than TLH and me.  It’s not an easy thing to be.  We wound around thru the fields, across the front of the farm, then headed into the farm on the road.  We rode up thru Buttercup field and thru the double gates at the Holiday Inn.  There’s more pavement at the farm and a lot more fencing than there used to be, but there were memories everywhere I looked.  Those double gates I remember very well.  We went out what I call the Cleveland gate and wound around, and up, and back onto farm trails that I recognized again, down thru pasture to the road again.  Then to the Tombstone (Dickenson) gate and to the cabin for lunch.  From the Cleveland gate to the farm trails was new to me, I think.  It was an interesting stretch and I’ll call it the Wild Game Preserve.  Apparently there are some hunters in the area.  There were quite a few ‘target’ animals along the trail which seemed to disturb many of the horses.  TLH thought the whole lot was ridiculous including the headless boar.  I thought the standing bear was best.  Some of this was road, but the trail part was lovely. 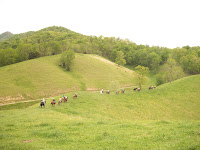 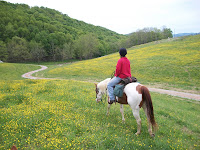 As I said Debra and I headed back after lunch while the rest journeyed on.  I’m not sure how much longer they rode but I’m sure they had a great day.  I know we did.  Even the ride back was lovely.  We stayed to the road and took our time, enjoying the many cows and calves we rode thru.  There was a bull here and there too.  One particular little calf, that I’m sure was testosterone heavy, was adorable.  He ran and bucked and all the normal showoff stuff, but then he would charge at Debra and Clem.  When he got close to them, he would wheel sharply around and return to mom.  After another kick and buck turn, he would go at them again!  He was so entertaining.  Oh the energy.  I agree:  youth is wasted on the young. 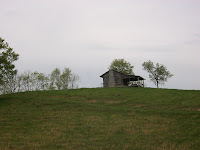 We loaded up and returned home without incident.  Thank God for a good day.  I think the rest were staying for BBQ and to watch the Derby.  I hope they enjoyed themselves.