Our God is an AWESOME God.
I don’t have a lot of 19 hour days and not that I ever wondered, but now I know why.  My day began with leaving my house on schedule at 600a with trailer.
Got back home (with trailer) just a few minutes before 100a. For me, who is usually asleep either in bed or on couch by 930p, this is a LONG day.  Simply an observation, not a complaint.
Now the good stuff is what was sandwiched in between.
After collecting Deb, Clem, and TLH, then collecting Laura, Dixie, we all headed for Asheville!  WooHoo!  Lookout Biltmore – here we come.  My brakes got hot going down Sam’s Gap; not sure why – suspect did not have adjusted appropriately.  After checking in on arrival, we got ready pretty quick because the temp was rising rapidly.  Departed on trail approximately 1130a.  Chose Red 2 w/o optional loop for about a 14m ride.  Debra was in charge of the trail choice.  She has to do something useful.
Yes, Biltmore is pricey.  Most of us can’t ride there regularly, but if you get the chance to go, I recommend that it is worth it to do at least once.  The trails are luxurious and we were quite comfortable all day even though it was a hot day.  We were on shaded trails for most of the day, with short stretches here and there in the open.  An afternoon storm that went conveniently around us cooled it off nicely for the late afternoon.
It was so nice to have our resident Marine Biologist (who used to be a Wildlife Biologist) with us.  We learned all kinds of flora and a little about some fauna.  Hence the PIPSISSEWA ride!  One of the quaint and stealth flora we learned was the pipsissewa plant (herb).  See the pic.  You will have to look for it, both here and in the wild.  It won’t jump out at you.  Of course Laura had a story to go with it and we adopted it as the ride mascot.  Also studied were:  sycamore; sweet gum; white oak, red and black oak (in theory only); loblolly pine; black cohosh; red pink; turkey, hawk, and owl feathers.  I’m sure there were plenty more that I can’t remember.  We did sorely miss our Girl Scout Leader and our Trail Master.  Wish they could have joined us.  They have lives without us, what a drag.
Our plan was the Red 2 for about 14m ride.  Emphasis on plan.  We got way too comfortable with the excellent trail markers so that we neglected the map.  Never neglect the map.  This complacency led us past the point to return before the optional loop.  After a family of hikers (the only people we encountered on the trail all day – how nice) commented on our “long” ride, Debra, curious about such a comment, consulted the map.  At this point the storm is booming and looming and we’re not real sure where it may strike.  Here we discovered our oversight and corrected by back-tracking to the “option-point”.  Estimate we were about 1.5 – 2 miles into the optional loop when we turned back.  So then, once back to the “option-point” we chose the alternate route (direct return as opposed to the optional loop) back to the trailer. 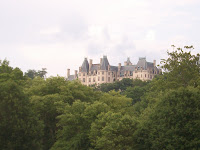 Some of the highlights were as follows.  I’m sure I’m leaving out good stuff, which will come to me later, but that’s the way it goes.  We got three great views of the Big House.  The first and front view was from our lovely lunch spot at the Statue of Diana pavilion.  The second was the view of the back of the house from the alternate route return trail.  The third and possibly the most breathtaking was from the bottom where we were parked, long before we got to our trailer.  While returning along the French Broad through this bottom I almost missed it because it was above and a little behind us.  Laura pointed it out fortunately.  Looking slightly up with the forest in the foreground and sky in the background, smack in the middle was the Biltmore House looking like it grew up from within the forest just like every tree there, and was every bit as much a part of the forest as the trees.  It simply outgrew the trees to tower over them as their guardian.  We got a visit from a little doe as she crossed the trail.  She stopped and studied us for a bit, then casually proceeded.  Saw a few turkeys.  One flew up suddenly startling us I think as much as we probably startled her.  Rode closely past a hen and her poults.  She wasn’t exactly inviting us to stay for dinner, but was not overly concerned about us.  Two gobblers with very long beards paid us no mind at all at the trail barn.  Lunch was splendid; courtesy Laura.  We ate at the picnic table at the Diana pavilion as I’m calling it.  The hitching rails were excellent.  Top notch bathrooms right there were a wonderful treat.  All the Biltmore folks we encountered were friendly and helpful.

Now for things to work on for next time.  Decide on an exit strategy BEFORE exiting.  Do not miss turns because I’m talking(or whoever is driving).  Find out where the water is.  There MUST be water for horses on the trail.  Find it.  Coordinate pick-ups and/or meetings so that it takes less than two hours to get out of Abingdon.  Make Debra drive.  Again, surely she can do something useful.
If you want to see all the pics from the day, click here.