Good early, crisp morning ride.  We arrived with plenty of time to get ready. Sigh of relief, I hate rushing.  The farm is beautiful.  Although I had been to the farm many years ago, this was my first time riding there.  I vaguely remember hauling in / out of there a few times with Marie.  Sweet setup:  all I had to do was meet Debra in the gravel church lot (with my gear).  She had the horses, did all the driving.  I could get used to the Princess Syndrome.  I did however have to groom and saddle Clem all by myself.

Small group of only five I think, including us.  Pryley did great.  Did his loading dance, getting shorter each time I think, when we were ready to leave but no big deal.  There was a nasty mud hole that neither of them liked, but they went thru.  First it was the typical “yuck, no I simply can’t step in THAT”, but then “ok, let’s get it over”.  Short ride, about an hour and a half I think.  Basic out and back, but since I hadn’t seen any of it before (past the barn area) it was very enjoyable, for me.  We left out the farm road past the arena, left up a hollow, climbed up and around a ridge to a great vantage point overlooking the farm.  Took a breather there, and then back down.  There were several canines protecting us.  I think they had the most fun of anyone.  They ran almost non-stop up, around, down, sweeping past from the front, from the back, from the side.  They came fast from seemingly nowhere into the rustling leaves just off the trail.  This provided plenty of distraction for Clem who always was on alert not wanting to be surprised by one of them running between her legs from nowhere.  The dogs didn’t bother her as such.  I think she was having the same problem I was:  HOW MANY of these critters are there, and how do they cover this much ground, and don’t they ever get tired?  I fear these are musings of grouchy old women; I picture Maxine asking these questions. 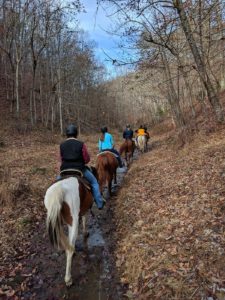 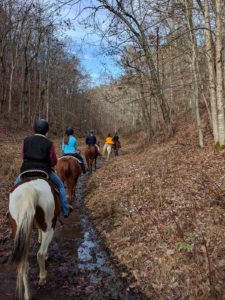 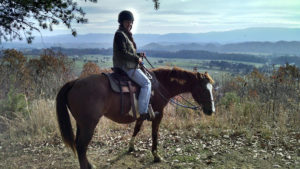