I’m liking the Princess Syndrome.  Saturday morning I loaded my gear, went to the dump to drop the trash, then showed up for my ride.  Debra wheeled in with the horses right on time.  It was pretty cool, but not enough to be uncomfortable at all.  I took my gloves but don’t think I put them on even once.

We rode on the Salt Trail. It’s a reclaimed railroad (rails to trails) similar to the Creeper trail.  The trail goes along and thru private property, much of it farms.  In places the trail is pretty close to the road.  Good footing, very gradual grade.  We passed one pedestrian with a dog, one biker, and one worker gathering firewood.  The trail gave us views of cattle, horses, donkeys, pigs, one peacock (who was camera shy), cats, and dogs of course.  One group of cows were particularly interesting as they were all laying around chewing their cud, which is typical.  The interesting part is that out of a huge pasture they chose to camp around a parked livestock trailer in the field.

It was an awesome ride, even though, and maybe because, it was very simple. Left at about 11.10 or 11.15a and returned at 155p. So, total time was about 3 hours. The day was beautiful, the trail was great, the horses were superb.  There was lots of grass along the way for snacks.  There was no lack of stimulation however.  There was of course the pig that was really close to the trail.  Not much notice on the way out, but on the way back Clem decided this was not on the friends list.  No problem, but she definitely was not a fan.  I’m not sure Pryley bothered to notice it. 🙂  The jack spotted us from a distance and came down to the fence, braying loudly several times.  Nobody seemed to care about that.  The parked wheelbarrow (for firewood) and the resting chainsaw with a jacket nearby were very interesting and required several minutes of careful investigation.  Then they were labelled as boring.  We were ALL surprised by a very close gunshot.  I think it surprised / startled us humans more than the equines.  They of course jumped (flinched not acrobatics) but that was all.  It was still deer season I think, which the horses didn’t know.  Humans however, never too comfortable in the woods during hunting season – EVEN IF clothed in BRIGHT ORANGE.

This was the best day so far for Pryley, regarding loading. He’s accepting that resistance is futile! 🙂

Definitely a thumbs up for the trail, for the horses, and for the day! 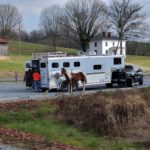 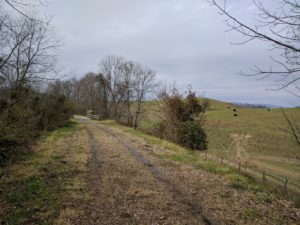 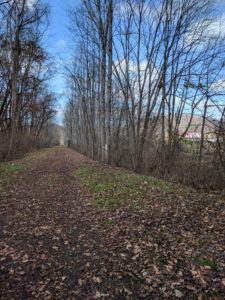 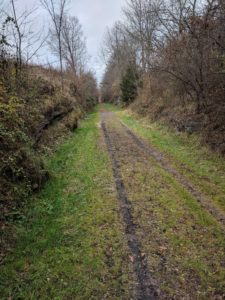