The comfortable, well lit barn has sixteen 10’x10’ stalls and nine 5’x10” stalls. With 15 level campsites, two of which are handicap accessible, the shaded campground is easy to maneuver, and the bath house is conveniently located.

For more information, and to make your reservations, contact the Park office

Camping With Horses and Riding at South Mountain State Park

Camping in itself takes a lot of preparation, planning, and work! But throw six horses, and six, umm, “vintage” gray haired women in the mix, and it adds a whole other level of “fun”! Ok, so maybe only four of us have gray hair, but mine is only gray when I’m looking in the mirror, so technically, I’m not gray either, right?!

I was fortunate enough to be invited to go to South Mountain State Park in Connelly Springs, NC with five exceptional women, and accepted the invitation immediately!

At 61 years old, it gets more and more difficult to find compatible trail riding partners, but this group fits my riding/camping style like speckles on a little German Shorthaired Pointer pup!

The six of us left from the Bristol, TN area on a Thursday morning at the end of October. There were three trucks, and three trailers, and the weather was beautiful! Pat, Joyce and Julie all did an excellent job driving over Roan Mountain, and through all of the little towns and winding country roads on the fourish hour trip from Bristol to South Mountain.

Caravaning with three trucks and trailers can sometimes be challenging, but no one got lost, and the horses were in great shape when we arrived!

…..were Pat and Kortney, and their trusty steeds, Ellie and Noli.

Ellie is a beautiful black walking horse, who looks like a thoroughbred, and has a motor that just won’t quit. She and Pat make an excellent team!

Noli is a Rocky Mountain horse, with the signature flaxen mane and tail, and is as beautiful as she is sweet. And let me tell you….that horse has endurance!

Not to be forgotten is Lottie aka, Lollie. The most adorable Short Haired (but had her hoodie on all weekend) Pointer, sweetheart of a dog!

Kortney belongs to Lottie, but I’m pretty sure she adopted all of us as surrogate Momma’s on this trip! I know she helped ease my doggie withdrawals while being away from my pack-o-pups for the weekend! 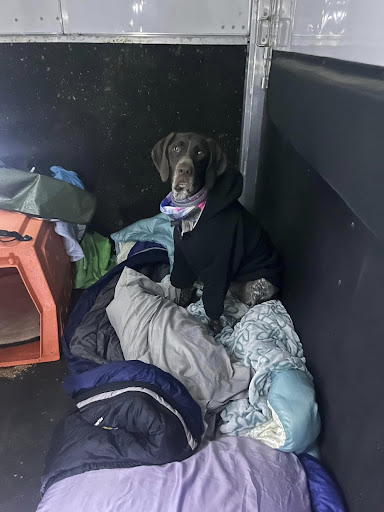 The second rig in the caravan was masterfully driven by Joyce, who was accompanied by her shotgun rider Lisa.

In tow was Joyce’s horse, Chance, whose personality and pranks kept us laughing all weekend.

Not to be out done was Lisa’s horse, Niko, who tried several times throughout the weekend to convince me how neglected he was by nudging me and telling me secrets over the stall door.

Coincidentally (?), Lisa always had her back turned, and missed every conversation.

I, of course, believed every word Niko said….wink, wink.

Bringing Up the Rear

Last, but not least were me and my expert chauffeur, Julie, and her very well mannered three year old buckskin walking horse, Rascal. Even though Rascal is only three, he’s a big boy and very smart, and Julie is doing a wonderful job training him.

Her patience with him is admirable! He really trusts her, and it was fun to watch him learn and grow in confidence over the course of the weekend. In the trailer with Rascal, was my small but mighty, paint quarter horse, Pryley. He is a solid, dependable and oh-so-much-fun-to-ride, big-hearted guy.

He confided in me later that he thinks Rascal has a lot of potential, and gave him some pointers while traveling in the trailer.

After unloading the horses and getting them settled into their nice, spacious stalls in the exceptional barn, at South Mountain, Julie, Pat and Joyce all parked the trucks and trailers in the spots that had been reserved.

The campground makes an oval, turning right and traveling one way counter-clockwise as you pull in.

There are 15 campsites; some that you back in, and some are areas that you pull off, like pulling off of the side of the road.

All of the spots are level and shaded, with electric hookup and designated picnic areas. However, not all of them have water or sewer hookup.

Mine and Julie’s spot was one that the trailer had to be backed into, but was mostly flat, with a picnic area just a few steps up from the camping pad, with electric hookup and plenty of shade trees. 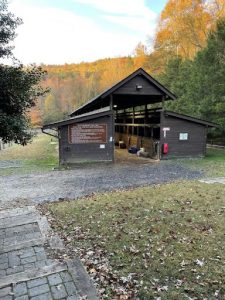 The spots that both Joyce and Pat had were the types that you pull off the main oval. The picnic areas for these sites were several steps up a bank, but they were good sized with a picnic table, a fire pit, and were private.

In my opinion, there are not any bad camping spots in this campground, and the barn is convenient to all of them. However, if you don’t have a living quarters in your trailer, the spots on the east and north side are probably better (closer to the bath house).

Two of the spots will accommodate two trailers, and several of them were adjacent to the creek.

The campground is very well maintained, and the bath house was very clean with plenty of nice HOT water that felt wonderful after a few hours in the saddle. 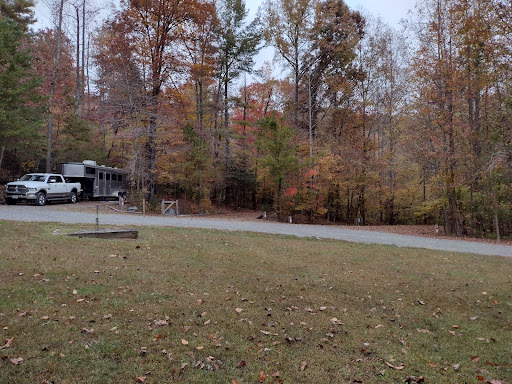 Friday morning we decided to split into two groups.

Pat and Kortney wanted to ride the perimeter trail, which is about a 20 mile loop.

The rest of us decided to do something shorter, around 16 miles, and rode the interior trails.

The trails are beautiful and the footing is great! There are several loops, and you can make the ride as long or as short as you want it to be.

We timed the trip perfectly, because the Fall colors of the leaves looked to be at peak. 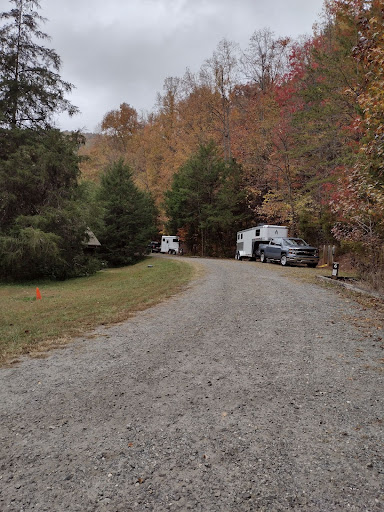 There were several spots on the trails where the view was breathtaking! One of these spots was the spot where we ate lunch. There was a picnic table, and a log that could be used as a bench – or mounting block!

Rather than tying up, we all held on to our horses, which made for a comical lunch! Ever tried to eat an apple with a 1000 pound “child” who LOVES apples???? Fortunately, being the vintage riders that we are, we know to pack a treat (or two) for our devoted and trusting mounts.

All total, we were on the trails for about six hours.

Once we got back to the barn, all of the horses got a well deserved brushing, hand grazing in the grassy areas around the barn, and a good dinner to replenish all of the burnt off calories. 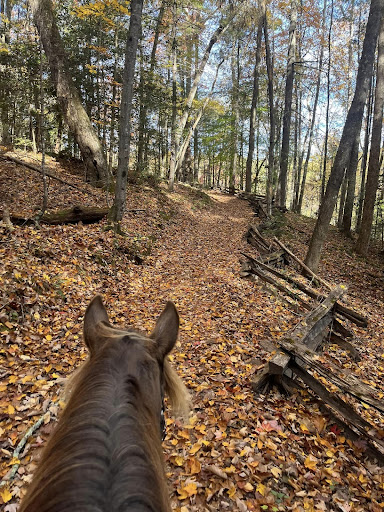 We all took turns fixing the meals for dinner.

Julie and I had the first night, and I’ll have to say, we had the best grilled chicken, potatoes cooked in the dutch oven (thanks to Lisa’s help!), and salad that I’ve ever eaten! ….not that I’m a great cook! Julie fixed the chicken, and well, I was HUNGRY!

The second night we had white (award winning!) chili that (wise) Joyce had fixed at home and had frozen, then reheated in the crockpot.

Lisa fixed salad and cornbread, and if I remember correctly, she also fixed those (pause for effect) BROWNIES!!!!

There were also cookies that were delicious, but I ate so many brownies, I was almost embarrassed to eat cookies too! But I persevered! Once again, it was the best meal ever!!! I was HUNGRY!

The third night was a red chili that Pat (who also is a wise woman!) had also fixed at home and frozen, then reheated in the crockpot.

Julie and I missed the third night because we decided to go home a day early, but I have no doubt that the meal that Pat and Kortney provided was the best ever too! You know, like the best peanut butter and jelly sandwich, when you think you’re starving!

Now, the reason that Julie and I left early

Saturday morning, Pat, Kortney, Joyce and Lisa decided to do a 15ish mile ride. Their horses are in great shape, well taken care of, and very capable of doing a 15 mile ride.

Since Rascal is only three, and Pryley is 15 and not in as good of shape, Julie and I decided to do a shorter ride. But, after only being on the trail a few miles, Rascal was showing signs of fatigue.

So, in the best interest of our horses, we turned around and headed back to the barn.

It was still early in the day when we got back to the barn, so Julie and I decided rather than having the horses stand in the stalls for the remainder of the day, then stand in the trailer to make the trip home the next day, we would forgo one night of camping and head on home.

Bonus – by leaving on Saturday, we were both able to attend church the next day and give thanks for wonderful friends, horses, the opportunity to ride, and the beauty of it all!

Until Next Time South Mountain…..
It was a melancholy decision to leave early, and not be able to enjoy sitting around the campfire with good friends and good food, and talk and laugh about the day’s adventures.

But that’s the way it is with our horses sometimes. We do what needs to be done in order to take the best possible care of these magnificent creatures, who trust us with their lives.

Sometimes, if you think about it too much, being responsible for the life and care of a horse is almost overwhelming. But there’s no other feeling quite like loving a horse, and feeling the love and respect in return…..unless that horse is a mare like my Clementine….

…..but that’s another story for another time!

I’m Debra and I’m an avid horseback rider, hiker, gardener, food preservationist, and all around outdoorsy person.
I don’t claim to be an expert at anything, but I like to share the knowledge that I have gleaned over the years from people much wiser than myself, as well as my own trials, successes and failures.
As the wife and partner of the most wonderful man/farmer who keeps our lifestyle thriving, I try to live my life by the Golden Rule, knowing that one day, I’ll answer to the One who made me!Debra