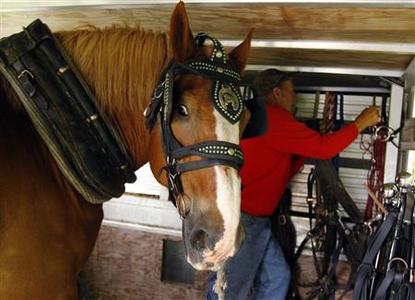 See the rest of the pics, click here.
By Zach Howard
HARDWICK, Vt | Tue Jun 28, 2011 4:58pm EDT
(Reuters) – In Vermont’s remote Northeast Kingdom an aging Belgian draft horse named Fred is part of a team racing to bring broadband Internet access to all corners of the state by 2013.
The horse, 14, and his owner, Claude Desmarais, 66, have been laboring up to seven days a week, over all four seasons, to haul miles of fiber-optic cable and rig it to telecommunications lines.
It is part of Governor Peter Shumlin’s vow to get Vermont entirely wired for broadband and cell phones.
The man and animal are indispensable to cable and phone-service provider FairPoint Communications because they easily can access hard-to-reach job sites along country roads, which bulky utility trucks often cannot.
“It just saves so much work – it would take probably 15 guys to do what Fred and Claude can do,” said Paul Clancy, foreman of a line crew from FairPoint. “They can pull 5,000 feet of cable with no sweat.”
On a recent June day, the tall, burly man and his muscular workhorse toiled 10 yards off of a desolate dirt road in hilly Hardwick, Vermont. They were assisting a work crew manning trucks and together they lashed cable to existing aerial utility line strung along wooden power poles.
As Desmarais murmured a signal, Fred tugged a length of cable from a mammoth truck-mounted reel. With a pull, the cable rose to a lineman, who looped it through a “lasher,” or a device that slides along the aerial line. By this method, the new cable was linked up to it as Fred ambled along.
The Belgian horse was outfitted with an old-fashioned draft harness and, attached behind that, an iron whippletree, which is a mechanism used for pulling.
With this gear, the effort seemed more like a glimpse of ancient farm work than a means of achieving the very modern goal of universal internet access for Vermonters.
Governor Shumlin’s “Connect VT” initiative this year was borne from his fear that the state’s long-standing connectivity deficit, if not confronted, will relegate it to an economic backwater.
“Vermont lags behind the developing world and ranks 46th among the 50 states in connectivity,” he said in his inaugural address in January.
Rewind to last century, when wiring largely rural Vermont for electricity proved to be an equally arduous process.
Because outfitting the state’s rugged areas with a power grid was not profitable for utility companies, sparsely populated towns such as Victory and Granby remained without electricity until as late as 1964.
But today, with Shumlin promising $410 million in private, federal and bonded capital for the broadband project, firms like FairPoint, VTel and Burlington Telecom are working urgently to provide high-speed Internet to all 620,000 Vermonters.
Fred and Desmarais are getting the job done in Hardwick, about 25 miles north of the capital Montpelier.
Residents rarely complain when FairPoint utilizes the Belgian draft team to complete its jobs in the backcountry, Desmarais told Reuters in an interview, speaking in a muted Vermont accent that softens his “R”s.
“They like the idea of using a horse, instead of bringing in a bulldozer or something like that,” he said.
“The horse seems to do less damage,” added Clancy, the foreman. “Everybody smiles.”
The draft team is especially nimble during seemingly endless Vermont winters, when the dense pack of snow and ice can reach four feet high. In those cold months, Fred can plow through it all like it’s merely grass.
As for Desmarais himself, he gets around steadily but a little slowly since a hip was replaced in 2003. Usually, all that bothers him on the job are the occasional snakes, which he is deathly afraid of, he said.
On this day, no snakes show themselves, though, and Fred munches continually on grass in between turns pulling cable. If the horse needs a drink of water, Desmarais usually can find him a brook nearby.
Desmarais said few other such draft teams do this type of work. One friend of his, using another of Desmarais’s horses, also has a contract with FairPoint at a separate location, he notes.
Some work days are longer than others, lasting up to 12 hours. But every evening, Desmarais and Fred clamber back into their truck and trailer, respectively, and return to Westmore, near the Canadian border, where the former dairy farmer grew up.
(Editing by Barbara Goldberg and Greg McCune)